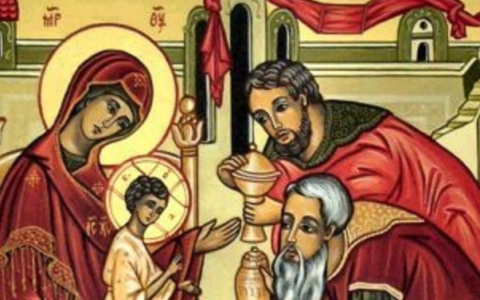 Today, we celebrate the Solemnity of the Epiphany, but, as often happens, our terminology is confused, and it obscures the real meaning of what we’ve been invited to celebrate. The name Epiphany comes directly from the Greek, and it means, literally, a shining forth, a manifestation. The name certainly fits the Christmas season. We’ve been focusing our attention for the past week on God’s self-manifestation—God’s Epiphany. In my recent homilies, I’ve been talking about God, the Messenger, becoming the Message (the Eternal Word). God is manifest in many ways: through the evolving universe, through the course of human history, and, ultimately, in the Word made flesh, the baby of Bethlehem. The nativity of Jesus is the real Epiphany.

Today’s celebration focuses our attention on the other side of the story. Let me give you a couple of examples. If a tree falls in the forest with no creature around to hear it, did it make a sound? If a person gives a lesson to an empty classroom, are they teaching? Evidently, if there is no one to receive a speaker’s message, communication cannot happen. Maybe what we call the Epiphany would be more accurately called the Apocalypse, because, in Greek, that word means “uncovering.” Another way of translating it would be “discovery.”

We might think of God the Father is the Speaker. God the Son—the Eternal Word—is what is Spoken. God the Holy Spirit is the verb, the Speaking. God the Speaker is always Speaking the Spoken Word. Still, there’s something missing: the listener. There can’t be communication without a listener. But remember: listeners have to work to make communication happen. Many things can get in the way between the Speaker and the listener so that the Message never gets through. One hurdle is static. That’s the background noise that hides the Message or makes it unintelligible. Next, there’s the issue of inattention. We live in a world where we’re bombarded with stimuli, and to survive, we have to filter out what seems extraneous. Then, there’s unconcern. We hear the Message, but we decide it doesn’t apply to us or can’t provide us with anything useful, so it gets eliminated by our inner spam filter. Finally, there’s incomprehension. That happens when the message isn’t received because of differences in language or meaning.

All these things: static, inattention, unconcern, and incomprehension, get in the way of our receiving God’s Message—the Eternal Word. Static: we’re too preoccupied with other, more “important” things than to concern ourselves with God’ Message. Inattention: we think God’s Message isn’t directed toward us and doesn’t apply to us. Unconcern: we may believe we’ve heard God’s Message so often that it’s of no further interest. Or, once again, incomprehension: God’s Message isn’t a soundbite, and we may think it’d take too much effort to try to understand it.

Now, look what happens when people are expecting a message, say an important phone call. Squelch static: they make sure their phone is somewhere close by where they’ll be sure to hear it. Overcome inattention: they’ll adjust their schedule so that nothing will compete with the call. Avoid unconcern: they focus their attention on the phone and listening for the ringtone. Eliminate incomprehension: if they’re not familiar with the equipment, they’ll do whatever is necessary to lean how to operate it to answer the call when it comes. That kind of care and concern is the essence of today’s feast.

God’s Message is available to everyone, but it’s received only by those who are looking for it. The magi were Persian astrologers who were skilled in searching the heavens for signs. They were sensitive to any changes in the night sky. Evidently, they saw something unusual around the time of Jesus’s birth, perhaps the appearance of a supernova. Many people at that time believed that every person was given a star at birth. What the magi saw in the western sky must have been significant because they considered it a sign of the birth of a significant person. They must have had some familiarity with the Hebrew Scriptures, because they were aware that Israel was expecting the birth of a Messiah-King. That was enough evidence for them to pack up their things and travel to Jerusalem.

Of course, when they arrived there, they went straight to King Herod because who would have known more about this newborn king than the king himself? But Herod was only nominally Jewish and no scripture scholar. He needed to call in the Scribes—those who were trained in the minutiae of the Law—to advise him. They reported, quoting the Prophet Micah, that the Messiah—the anointed King and descendent of David—would be born in Bethlehem, David’s city. With that information, the magi left Jerusalem and headed for Bethlehem, where they found the infant Jesus.

The point is, everybody must have seen the star if it was that significant. Yet only the magi did the research to see what it might mean. Similarly, everybody must have wondered what the fuss was about. Yet only the magi packed up their things and went to find out. Herod certainly heard about the birth from the magi, but he couldn’t be bothered to go look for the baby himself. Even the Scribes knew all the prophesies and knew what the magi were about, but not one of them was curious enough to go themselves and check out the story. Nobody went to Bethlehem to see the newborn king but the magi—foreigners who were not even Jewish.

Therefore, today we celebrate not only the magi, but all those seekers who want to find God’s Message and are willing to put themselves out there in order to receive it. As always in the Scriptures, the story is not primarily about the magi—it is about you and me and how diligently we’re willing to seek to hear what God is saying to us. For those in conscious contact, God is never silent. The only question is how much effort are we willing to expend to hear God’s Message and be receivers of God’s Eternal Word? How well are we willing to listen?