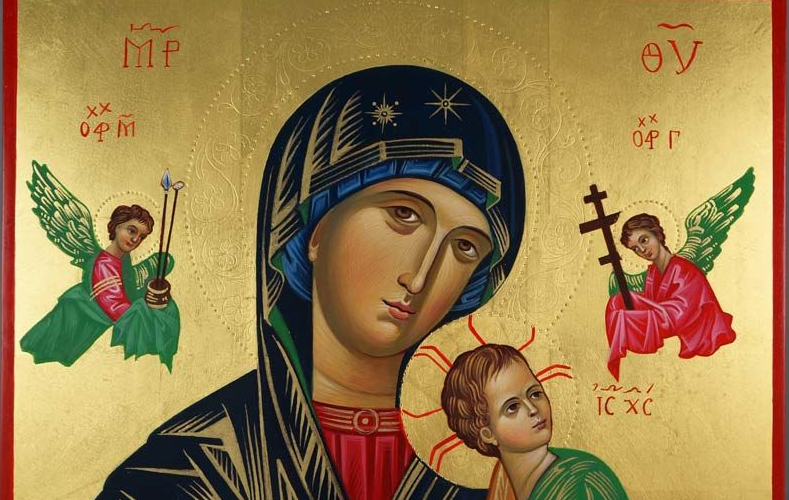 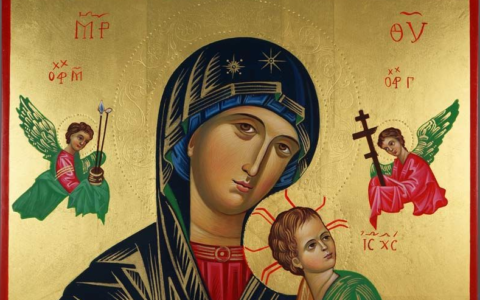 Last weekend, we offered one Liturgy (the Nativity of the Lord) over two celebrations (Midnight Mass and the Christmas Morning Mass). This weekend, we offer two Liturgies (the Solemnity of Mary Mother of God, and the Circumcision of Jesus) in one celebration. These two Liturgies were originally celebrated separately, but they were joined together in the liturgical reform of 1960 under the current title, the Solemnity of Mary, Mother of God. Although the relationship between the two may seem at first very tangential, they’re more closely related than you might think.

Mary’s title, Mother of God, is an awkward attempt to render in English the Greek term, Θεοτοκος (Theotokos). It means, literally, “she who gave birth to God,” or, “God-bearer.” It refers more to her giving birth to Jesus than to her relationship to Jesus as his mother. The term, Θεοτοκος was critically important to the Christian Church of the fourth and fifth centuries. It was formulated as a response to the heretic Nestorius who taught that Jesus was, indeed, both God and human, but the two were separate. That meant that Mary would have given birth only to the human Jesus and not the divine Son, and, subsequently, only the human Jesus would have died on the cross. The Ecumenical Council of Ephesus in 431 put an end to the discussion, declaring that Jesus’s two natures—human and divine—made up one individual person, and therefore Mary gave birth to the divine as well as the human Jesus. This is not to say she was the mother of God the Father before time began, but only that she gave birth to the eternal Word made flesh.

The point of this whole discussion is that the focus of this celebration is only on the motherhood of Mary insofar as it is a consequence of the divinity of Jesus, whom she bore. In other words, Mary could not be the Θεοτοκος apart from Jesus, both divine and human. This celebration tells us more about Jesus than it does about Mary. On Christmas morning, I spoke about the eternal Word taking on our human existence—the Messenger becoming the Message. Today, we learn a little more about that Message.

I’ve told you about how God messes with time. The Passover meal, the passing of the angel of death over the homes of the faithful Israelites, the passage through the Sea of Reeds, the Last Supper, the Passover of Christ from death to life and today’s eucharistic celebration are all one event made present to us, and our presence at one is our presence at all of them. But, furthermore, God not only messes with time, but God also gets his hands dirty with it. Although it’s easier and more comfortable for us to think of God as “somewhere out there,”—an esoteric figure relatively unconcerned with human affairs, our God is a messy God who allows himself to become involved with humanity, caught in the net of evil, suffering and death.

That’s why Θεοτοκος is so important. God’s not like an “Elf on the Shelf” up there just waiting for us to do something wrong. God’s more like a playmate who’s teaching us a new game while he’s playing it with us. One reason Alcoholics Anonymous is so successful is because it’s not an addiction treatment program. It’s one alcoholic talking to another, sharing common experiences that can’t be faked. In the same way Jesus is not God pretending to be human, nor is he human pretending to be God. It’s not as if God is imposing a divine solution to our human problems from outside. Instead, the divine solution to our human fallibility and mortality wells up from within us. God transforms our human nature from the inside.

One of my favorite stories is of a little boy walking and playing in the park with his father. He comes up to his dad, holding a flowerless tulip stem. “Daddy,” he asks, “Why is it that when I try to open a bud, it falls apart; but when God opens it, it’s a beautiful flower?” The father had to think hard to find a suitable answer to that typically unanswerable question. Before he had a chance to open his mouth, the boy said, “Oh! I know. God opens it from the inside.” Indeed, God does.

And that’s the connection point between our two liturgical celebrations. Let’s turn to the Feast of the Circumcision. Why was this important? Circumcision of Jewish males was a sign of the Covenant in the flesh—literally. You remember the terms of the Covenant: “You will be my people and I will be your God” [Exodus 6:7]. You also remember that the stipulations of that covenant are found in the Law of Moses—all 613 commandments. When an infant Jewish boy was circumcised on the eighth day after his birth—his week-aversary, so to speak—he entered into that Covenant with all the stipulations of the Law. By his circumcision, Jesus became subject to the Law.

Never once did Jesus say, “Don’t obey the Law.” He proclaimed the opposite: “For truly I tell you, until heaven and earth pass away, not the smallest letter or stroke of a letter shall pass from the Law, until all is accomplished” [Matthew 5:18]. And yet, he was infamous for challenging the Scribes and Pharisees on their interpretation of the Law. What he accomplished was the transformation of people’s understanding of obedience to God, and he did so from within the practice of the Law. Once again, with Jesus’s circumcision, God gets his hands dirty with human affairs. In all things, from the evolution of the universe, to the Eternal Word’s emergence into history, to our own maturing in the Spirit, God transforms everything from the inside.

We call the Christ, “Immanuel,” which means “God is with us.” That’s what we celebrate today, and the entire twelve days of Christmas: that God is with us and within us, our world, our history, our own spirits. God is working quietly but powerfully within us to transform us and all reality into what we were always destined to become: fully human and fully alive. It’s not our plan, and it’s not our power to achieve it. Ours is only the choice whether to let the God transform us from within, or not. May we choose wisely.