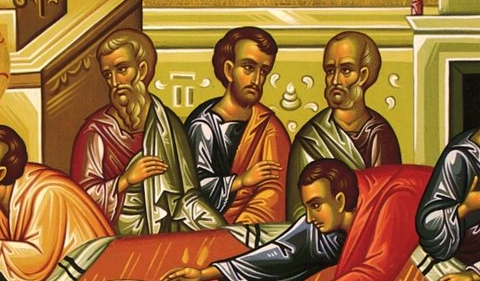 During Holy Week, we shift from the Gospel of Luke that we have been reading since the beginning of Advent to the Gospel of John. You might think that’s a small shift—six of one, half a dozen of another—but it’s more significant than might be at first evident. Matthew, Mark, and Luke’s gospels are all kerygmatic—that means that they were meant to convey the essence of the apostolic faith to those just leaning about Christianity. The Gospel of John is different. By the time it was written, the kerygma was already well-established and well-known. John’s gospel was written as an invitation for Christians of the early Church to plunge more deeply into their faith and to discover new meanings. As you may recall, John’s is a mystical gospel, meant to enhance one’s personal encounter with the Word made Flesh among us.

The second reading this evening describes the evening meal that Jesus shared with his disciples. If we follow the lead of the Synoptics—Matthew, Mark, and Luke—the event that Saint Paul is narrating takes place at a Passover meal. The Passover meal itself is heavy with all the meanings we’ve already mentioned. Even within this sacred space and time, Jesus adds a new layer. He performs a prophetic action himself, giving the Passover bread and Blessing Cup of wine to his disciples as his own body and blood. We learned in our study of Genesis that biblical Hebrew had no word for “body.” Instead, they used the word, “flesh,” to stand, not only for the body, but for the whole person. We also learned that, for the Hebrews, life is in the blood. Therefore, in this prophetic gesture, Jesus gives us, his disciples, his personhood and his life in the form of bread and wine. No longer is it a Passover from slavery to freedom. It’s now a Passover from death to eternal life. It’s a sacrifice—an offering—no longer of propitiation, but of thanksgiving for our new life—a eucharist.

Finally, we come to John’s Gospel, and, at first, we’re confused. The meal that Jesus is eating with his disciples is not the Passover. We’re told during the reading of John’s Passion narrative tomorrow, that the coming day, Friday, was the preparation day for the Passover, and that the day after, Saturday, the Sabbath, was the solemn feast. So, John’s Last Supper is not a Passover meal. Not only that, but John leaves out the institution of the eucharist entirely. No Passover. No eucharist. But John provides us with a prophetic gesture, nonetheless. Remember that a prophetic gesture is a startling action that causes people to wonder and question. That’s exactly what’s reported in today’s gospel.

The people reclining around the table that evening had left everything—family and livelihood—to follow the Master. They watched as at the beginning of the meal, he took off his good tunic, took a basin and ewer of water, and began to wash their feet. Only service personnel would perform that task for invited guests, never the guests themselves and, certainly not, the Master himself. Yet, there he was on his knees in front of them. It was such a startling gesture that the disciples didn’t know what to make of it. Peter even objected loudly, yet Jesus insisted, warning Peter that, otherwise, he would have no share with him—a deliberately ambiguous statement that could mean the meal, or Jesus’s suffering and death, or Jesus’s resurrection and ascension into glory. I must assume that Jesus washed the feet of everyone in the room—not just the Twelve (including Judas), but also any other disciples and faithful followers present, and perhaps even whatever service staff there may have been. The evangelist considered this gesture—not even reported by the other three gospels—to be as important as the eucharist. Why?

John was highlighting two critical realities: one, the nature and mission of the Christ, and two, the nature and mission of the Christian. Who was Jesus for John? Obviously, he was the anointed, the Messiah, the Christ. But, most of all, he was the Suffering Servant written about by the Prophet Isaiah, the sacrificial lamb without blemish who caused the angel of death to pass over. For the first three days of this Holy Week, our first readings have been the first three Songs of the Suffering Servant from Isaiah. The fourth Song will be read as our first reading tomorrow (Good Friday). If you wish to read them, I’m providing a link to them [click here]. By accepting to become the servant of all through his actions, Jesus shows himself to be the One foretold by the prophet. Jesus reveals himself as the Christ through his service of all—regardless of their status, regardless of their “worthiness.”

Jesus’s exhortation that followed the washing was perfectly clear. “If I, therefore, the master and teacher, have washed your feet, you ought to wash one another’s feet.” And that, my dear friends, is Saint John’s eucharist. Jesus is present in selfless service. Originally the terms “Body of Christ” and “Real Presence” referred to the Church itself, for “Where two or more are gathered together in my name, there am I in the midst of them” [Matthew 18:20]. The essence of the eucharistic sacrifice is found in service to one another. It’s there where we encounter the Real Presence of Jesus and where Jesus becomes present to those we serve. By replacing the prophetic gesture of giving his disciples his body to eat and his blood to drink with the prophetic gesture of Jesus washing his disciples’ feet, John has taken us deeper into the mystery of the eucharist. Receiving the person and life of Jesus in the Sacrament without living the life of service of Jesus to others leaves the eucharist an empty symbol—a prophetic sign without meaning.

I can’t wash your feet at this liturgy as is happening at liturgies all over the world. No matter. What’s important tonight is our rededication to washing one another’s feet by our service to others. It’s important to note that, like Jesus, our service can’t be only to the people we know and like, or even to the people we consider “worthy” of our time and energy. Jesus didn’t discriminate, and neither can we, if we would follow him.

Finally, at the end of this evening’s liturgy, we’re invited to “watch and pray” with Jesus, present in the eucharist. This time, as we focus our attention on the eucharistic presence of Our Lord, we might recall that the gift of his person and life—his body and his blood—can’t be truly effective in our world unless we’re willing to carry his presence with us in our service to one another.