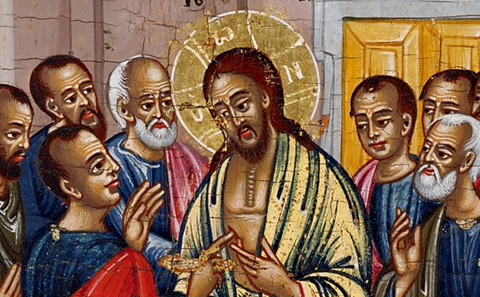 Here we have another instance of a too-well-known gospel story. It even has a nickname: “Doubting Thomas.” I hope, by the time we’re finished with it this morning, you’ll see things in it you may not have expected. That is, after all, why we have homilies. Before we begin, I think it’s always a good idea to remind ourselves that this passage is from the Gospel of John. That means we’re dealing with a mystical, rather than historical, text, that is rich in meaning. It’s also the last of the gospels and therefore benefits from decades of experience in the early Christian Church.

The fact that John locates this event—this appearance of Jesus—on Easter Sunday is not a random choice. Sunday had become the day of Christian worship. Originally, the first Jewish followers of Jesus kept the Sabbath from sundown on Friday until sundown on Saturday. When the Sabbath was over, they got together for a communal meal that included the Eucharist. Technically speaking, since it was after sundown, they counted it as the next day. We do the same thing with our Vigil Masses on Saturday evenings. When we read John’s account of the risen Jesus’s appearance among his disciples, we find distinctly liturgical undercurrents, starting with the fact that the Church—the disciples of Jesus—are gathered for a Sunday meal and Jesus becomes present in their midst.

His first gift to them is his peace. His second gift is his presence. His third gift is the Holy Spirit. For John, the gift of the Holy Spirit was given on the same day—the day of resurrection—rather than on the Jewish feast of Pentecost, fifty days later. As always, John is not interested in precise chronology. Instead, there’s an unmistakable sacramentality in this passage. Jesus’s breath—his πνευμα (pneuma)—conveys to his disciples the Spirit of God, the רוח־יהוה (ruaḥ-Yahweh). It’s a recapitulation of the breath of God we encountered in the second chapter of the Book of Genesis [2:7] where God breathed the breath of life into the newly-formed person’s nostrils so that he became a living being. Jesus breathes new and eternal life into his Church. This gift of the Spirit carries with it a double commission: one, to continue Jesus’s mission in the world and carry out for all time the work that the Father had sent Jesus to do; and two, to bring God’s forgiveness and reconciliation to those alienated by sin. In fact, we could, if we had the time, trace back all seven of our Sacraments to that moment from John’s Gospel. The whole context of the event is liturgical.

Now, let’s talk about our friend, the famous “Doubting Thomas.” Throughout Christian history, the Apostles, and particularly Thomas, have been criticized for their reluctance to believe the news of the resurrection. Even when we read the story, we want to say, “Hey people! You had the Scriptures, you had all of Jesus’s teachings, you had his powerful acts, and he even told you plainly what was going to happen to him. How dense could you be?” There’s an implicit message in the way many Christians tell this story: don’t be like Thomas! I couldn’t disagree more.

Thomas was evidently a very strong character. In no way was he lacking in forthrightness or courage. When Jesus announced to his disciples that they would be returning to Judea one last time after the people there had tried to stone him to death, it was Thomas who said to the others, “Let us go along to die with him.” [John 11:16] So, it was perfectly in character that he demanded proof when the other disciples told him that they had seen the risen Lord. It’s not necessarily that he doubted their word. He was well aware of how shaken they’d all been by Jesus’s arrest and crucifixion. Evidently, he doubted the clarity and impartiality of their judgment under the circumstances. People sometimes claimed to have seen Ghosts—even Jesus told his disciples that he was not a ghost—but that’s not what the disciples were claiming. They claimed to have seen Jesus alive. Naturally, Thomas wanted some evidence that they were not delusional.

So, Thomas gets criticized for his skepticism. That criticism isn’t restricted to Thomas. It extends to anyone who doubts or questions matters of faith. The critics believe that anyone who questions their beliefs is lacking in faith and therefore not a “good” Christian. But we say that Jesus is our model, so we need to look to Jesus to see how he handled questions of faith. How did he treat people who questioned him? It all depended on the person asking the question, didn’t it? When it was one of his disciples or someone genuinely seeking understanding, he always responded patiently and with kindness. But when it was the scribes and Pharisees or anyone trying to trip him up, he frequently made them look foolish…while answering their questions. How did he treat Thomas? He said, “Peace to you.” Then he said, “Put your finger here and see my hands, and bring your hand and put it into my side and do not be unbelieving but believe.” In other words, Jesus responded to Thomas’s questioning with patience and a forthrightness that Thomas could genuinely appreciate. He met Thomas exactly where he was.

There are two lessons we can learn from today’s gospel. The first is that God does not disparage people who have doubts or question their beliefs. On the contrary. God appreciates skeptics. You see, a person who is actively questioning has a living faith. They are seekers. They may appear weak and confused, but that’s of no concern. To them, what they believe matters. They’re not satisfied with glib, easy, formulaic answers. They need more. They want to go deeper. They want to understand. God honors that, regardless of how unorthodox their way of looking at things may seem to others. The ones whose faith is suspect are those who have all the answers, who can quote chapter and verse, and pretend they never doubt or question. A lot of what they call “faith” is simply conformity. For you, don’t be like them. Question everything.

The second lesson we can learn from today’s gospel is not so much about Thomas as it is about Jesus and us. I don’t believe that there’s any such thing as the perfect family, so I think I’m justified in saying that no one escapes childhood unscathed. Likewise, no one makes it through life undamaged. Some of the trauma we encounter comes from how we’ve been treated, but then, at least as much comes from our own missteps. When we look at ourselves and see our woundedness and how much the people we’ve become differ from the people we once thought we were, we may be tempted to feel ashamed. Don’t. Jesus revealed himself to those he loved by showing them his wounds, and that’s how they recognized him. Jesus carried his wounds in his risen body. So shall we. Our wounds are testimony to the fact that we have lived. When we pass through the gates of death, how do you think our loved ones who have gone before will recognize us, if not by our wounds?