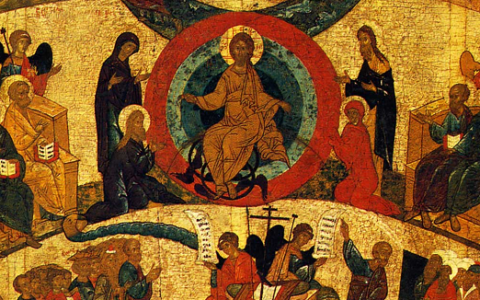 Perhaps the greatest illusion we encounter in this life is our concept of time. We think about it and talk about it as if it were a real thing. Most often, we think of time as a commodity, like a bushel of potatoes. How much time do we have? Is there enough time? Are we short on time? We have to find time so that we can spend time, but we don’t want to waste time. Will it last a long time, or just a short time? Other commodities we measure in pounds or quarts or even bushels; quantities of time, we measure in seconds, minutes, hours, days, years, and millennia.

That’s not the only way we conceive of time. We also think of it as location: a point in a four-dimensional time-space grid. When we talk of time as location rather than as a commodity, we use different language. We say: this time, last time, next time, every time, now, early, late, just in time, or on time. We measure it differently, also. We tell time from our geography by using clocks. We determine the location of our particular place in space and time by determining our position relative to the sun.

Regardless of which way we consider time, in both cases, we see that time is simply a measurement, either of duration, or of our place in the universe. In fact, time is just a measurement of change. All conscious creatures have some awareness of time. Dogs don’t need a clock to tell them when it’s time to be fed. Yet, without conscious beings to measure it, change would still occur. But would time exist?

A universe without conscious beings would be absurd. It would be senseless to think of the beginning of time or the end of time with no one to measure it. You might object, “But God would be present to observe it all, isn’t that right?” I’m afraid it isn’t that simple. It’s true that we think of God as acting in time. However, God acts in time only from our perspective because we are in time. God exists in an eternal “now.” Have I confused you enough for one morning?

Here’s the point: at the end of the worship cycle that we call the liturgical year, we’re invited through the Scripture readings to reflect on the end of the world. Yet, we mustn’t think of it in terms of the physical sciences. Scientists aren’t certain what the ultimate fate of the universe may be. From what I just explained to you about the nature of time, I hope you’ll see that the fate of the universe is none of our concern. No one will be there to observe it. Furthermore, this certainly was not Jesus’s concern in his teaching.

The problem with today’s gospel—and the parallel passages in Matthew’s and Luke’s gospels—is that Jesus was using contemporary language and images to express a truth. All Jewish people at that time were familiar with those images. They encountered them in their literature and their stories wherever they turned. They were very much a part of the Jewish culture, and not even the gentiles of the time could understand them well.

We have here an example of what is called “apocalyptic literature.” “Apocalyptic” comes from the Greek word κολυψις (kolupsis), meaning “covering.” Therefore αποκαλυψις (apokalupsis) means an “uncovering,” a “revelation.” It was supposed to reveal hidden mysteries, but it most often required interpretation itself. Apocalyptic literature was a direct descendant of prophetic literature and borrows much of its imagery and meaning from the prophets. To fully appreciate what Jesus is saying in today’s gospel on your own, you’d need to immerse yourselves in the prophetic passages the text is referring to. Fortunately, you don’t have to do all that work, because I’ve posted eight of the more important passages on our website, or you can access them here. You’ll see there references to the “Day of Yahweh,” or the “Day of the Lord.”

Originally, the Day of Yahweh was supposed to be the time when Yahweh would summon his heavenly army—the heavenly host—and march into battle against Israel’s enemies, routing or destroying them. Therefore, the Day of Yahweh had certain characteristics. First, it would be a terrible war. Second, the heavenly host—all of nature—would be conscripted into battle, including the sun, the moon, and the stars. Finally, Yahweh would impose his judgment, bringing glory to Israel and humiliation to Israel’s enemies. It was thought of as a day of glorious triumph when Israel would be fully restored.

That was the original thought. However, the prophets set about right away making certain corrections. Isaiah says this [2:10-12]:

10 Get behind the rocks,
hide in the dust,
From the terror of the Lord
and the splendor of his majesty!
11 The eyes of human pride shall be lowered,
the arrogance of mortals shall be abased,
and the Lord alone will be exalted, on that day.[a]
12 For the Lord of hosts will have his day
against all that is proud and arrogant,
against all that is high, and it will be brought low;

This passage is not addressed to Israel’s enemies, but to God’s: a warning to the proud, the arrogant, and the haughty both inside and outside Israel. Likewise, the prophet Amos warned, “Truly, the day of the Lord will be darkness, not light, gloom without any brightness!”

Jesus also refers to the image of the Son of Man coming on the clouds with power and glory. This image is taken from the prophet Daniel [7:13-14]. This passage will be read next week as our first reading. What we see there is a human being but imbued with the divine characteristic of God’s glory. He is empowered to impose God’s judgment on humankind, not only to punish God’s enemies, but to gather God’s chosen people into his kingdom. For Jewish hearers, when Jesus claims the title Son of Man for himself, he is saying something even more powerful than calling himself the Son of God.             So, what’s this passage about, if not the end of the world? When is this Day of Yahweh? Jesus tells his disciples, in effect, “Look around you.” When your spirit is embattled and you cannot see the sun, when every day seems like an impossible struggle and you cannot find the way forward, the Day of Yahweh is at hand. When you are most brought low, humbled, and powerless, it is then that the Son of Man comes to you with God’s power and glory to gather you in. Don’t ask when the Day of Yahweh is coming—it’s already here.