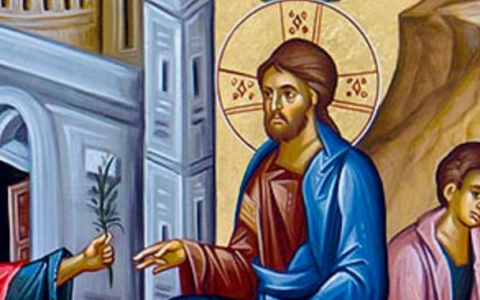 Once upon a time, years ago, I was captivated by a beautiful bronze horse—a copy of an antique Chinese statue. It was good sized: about eighteen inches high. I don’t remember anymore what made it so special to me that it caught my eye, but I was really taken by it. One morning, I came downstairs as I always did and set about getting my breakfast. It happened to be my birthday, but I didn’t give it much thought. After a bit, my roommate joined me in the kitchen, and we started chatting for a while. Finally, he asked me, “Did you notice anything?” Of course, I hadn’t, so I started looking around. There, in the middle of the dining room table, right in front of me the whole time, was the bronze horse.

How often that happens! We go about our daily routine, half oblivious to what’s around us until someone points it out to us. Many times, the best place to hide something is in plain sight. God, too, hides in plain sight. We turn a blind eye to him until someone points him out to us. For the people of Galilee and Judea, Jesus was a well-known personality. In an age before mass media, Jesus’s reputation had quickly spread throughout the region. People travelled great distances just to hear him speak. Many were enthralled by his words, while many dismissed him as just another publicity-seeker whose reputation was mainly hype. For three years, he’d been preaching the same message: “Repent and believe the good news.” Surely, some people, especially the religious authorities, were tired of it…and tired of him. Even the people in his own hometown of Nazareth found him too much for them [Mark 6:3].

The disciples were well aware of the powerful opposition to Jesus that had grown up in Jerusalem. They warned Jesus of the danger. Yet, it was time for him to point out to everyone what had been hidden in plain sight. Jesus set it all up in advance. He knew what needed to be done. The time for words was passed. It was time for action—not violent action, but prophetic action. When the prophets of old were no longer listened to, they performed some act that would get everyone’s attention. Jesus would do something that everyone would notice and remove all ambiguity about who he was and why he had come.

The young donkey—a colt, the foal of an ass—was ready for him. He sent his disciples to fetch it, and rode it the two miles from the Mount of Olives to the gates of Jerusalem. The disciples were overjoyed. They knew what that meant. At last, Jesus was going to reveal his true identity to the world without parables or circumlocutions. He was sending an unmistakable message. What was it?

The Gospels of Matthew and John both quote the Prophet Zechariah [9:9]—a passage that was well-known to all in Jerusalem. It states:

“Rejoice heartily, O daughter Zion,
shout for joy, O daughter Jerusalem!
See, your king shall come to you;
a just savior is he,
Meek and riding on an ass,
on a colt, the foal of an ass.”

The prophesy goes on to say that the king will reign in peace, and his dominion would cover the whole land “from sea to sea” and “to the ends of the earth.” That the king would ride a donkey was significant. Kings would only ride horses into battle. The donkey was considered a noble beast. When Kings would come to visit their cities in peace, they would ride in on a donkey. In effect, Jesus was claiming to be the king spoken of by Zechariah: the Messiah, the long-awaited anointed king of Israel. The disciples and the crowd that welcomed Jesus to Jerusalem understood this. That’s why the shouting and jubilation. No more hiding in plain sight. His identity was revealed.

Showing our true selves is always risky. We risk rejection, especially if we wish to be agents of change. Anyone who promotes change—even change for the better—will encounter opposition. There’s a clever saying that goes, “No good deed goes unpunished.” Proclaiming yourself an agent of change as Jesus did will generate push-back. Social systems, religious or political, resist change, and so do individuals. The more radical and significant the change, the stronger the opposition. In just a few minutes, we’ll hear the opposition Jesus faced. It ended on Calvary. Yet, with courage, he took that fateful ride into Jerusalem regardless of the consequences. He knew that, by being faithful to the will of his Father, his Father would never let him down, despite the cost.

We, too, are called to be agents of change in a world that doesn’t want it. We are called to be followers of Jesus and to follow where he has led, relying only on our faith in the Father. May we show that kind of courage.