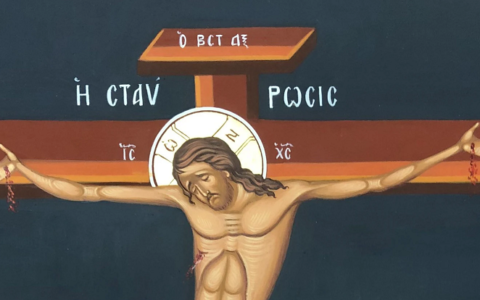 I ask that question because so many self-professed Christians have been unable or unwilling to extricate themselves from the curse of the Law of Moses. They still worship a vengeful, punishing God, who has nothing in common with the God and Father of Our Lord, Jesus Christ. Even today, sermons will be preached all over the world about how God punished his only begotten Son, Jesus, for our sins. Are they deaf to the blasphemy? Who could believe in, let alone worship, such a cruel and unjust God? Certainly not Jesus nor his apostles.

If God doesn’t lay the punishment due to our sins onto Jesus, the Suffering Servant, then what can we say about the words we just read from the Prophet Isaiah?

But he was pierced for our offenses,
crushed for our sins;
upon him was the chastisement that makes us whole,
by his stripes we were healed.
We had all gone astray like sheep,
each following his own way;
but the Lord laid upon him
the guilt of us all.

Doesn’t that infer that God punished Jesus for the sins of humankind?

Let’s consider a modern-day parable. One day a small group of four were preparing to take a boat out deep-sea fishing. A young Coastguard officer came by to warn them that there was a serious storm predicted and told them they shouldn’t venture out.

One of the group told him, “We get those warnings all the time and nothing ever happens. I can’t imagine it’ll be anything serious.”

Another said, “I’m a licensed sea captain. I commanded bigger boats than this before you were born. I know what I’m doing.”

Yet another said, “Don’t you know who I am? I’m the mayor of this city, and if you don’t leave us alone, I’ll have you demoted.”

The fourth one said, “Look. This is my boat. I can take it out whenever I want. It’s a free country.”

The four set out in the boat into deep water and put their lines in. Before long, a furious storm kicked up. The waves crashed over the boat, and it began taking on water. The owner radioed for help and the Coastguard sent a helicopter out to find them. The officer who jumped into the water to pull the four to safety was the same young man who’d tried to warn them of the danger. No sooner had he jumped into the water, than the folks from the boat, terrified of drowning, mobbed the young officer, tore at him, and climbed over him to get to the life raft. In the process, the young man himself drowned. Do you suppose that God punished the young officer for the sins of the boat crew?

Obviously not. And yet, he was torn at for their offenses, climbed over for their sins and upon him was the fate that made the others whole. You see, human selfishness and greed create their own chaos. The wages of sin is, indeed, death—but not necessarily to the sinner. Chaos can’t be overcome by confrontation. Confrontation only creates more chaos. What absorbs and destroys the power of chaos is acceptance and surrender. Jesus’s acceptance of his ministry as Suffering Servant and his surrender to the power of jealousy and hatred rendered them ultimately impotent. He triumphed over the powers of chaos and was set free from them by his acceptance of death, even death on a cross, and his surrender to the saving will of his Father. Not only that, but he provided his disciples with a way they could do the same by following in his footsteps.

It doesn’t matter what our challenges may be. It doesn’t matter how weak or powerful we may be. The road through chaos, the road through suffering and even death is always the same: unconditional acceptance of life on life’s terms, and unconditional surrender to the will of God as it appears to us, regardless of how unjust or difficult it may seem at the time. The cross always appears unfair. It always appears impossible. Yet we know—Jesus has shown us—that no matter what shape it may take, the cross is our one and only door to the Resurrection.