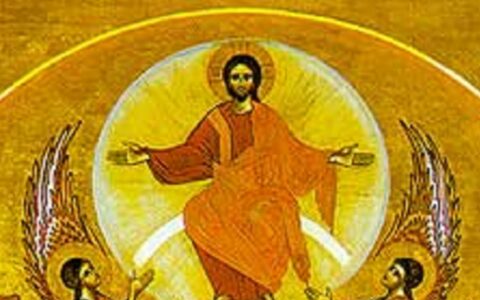 Although today’s gospel passage looks very straightforward and easy to understand, it is certainly one of the most difficult to interpret in all the Scriptures. The Ascension of the Lord is obscure, and don’t assume that, at the end of this homily, you’ll have a better idea of what happened on that day so long ago. As a matter of fact, the events as the first disciples experienced them seem to be lost to us forever.

Christ’s Ascension into heaven is described specifically in only two-and-a-half places in the New Testament: here, in the Gospel of Luke, in the Acts of the Apostles we heard in our first reading—also under the authorship of Luke—and in the Gospel of Mark, where it is apparently a later addition derived from Luke’s writings. Only in the Acts of the Apostles did Luke provide us with any details of time and place for the event: forty days after the Resurrection and on the Mount of Olives.

We can disassemble Luke’s descriptions a little, starting with that time and place. The Ascension concludes the period of time during which the risen Jesus appeared to his disciples. How long was that period? Forty days? For the Jewish people, forty is a symbolic number that refers to completeness. Forty years is a generation. It rained for forty days and forty nights during the great flood. The people of Israel wandered in the desert for forty years. Jesus was tempted in the desert for forty days and forty nights. In every example, the event described lasted until it was done and complete. For us, therefore, Luke’s forty days tells us only that the time of Jesus’s appearances after the Resurrection was over, and this was the last of his appearances. The Ascension event, therefore, is a continuation of the Resurrection, and can’t be separated from it.

Now, let’s look at the place where Luke locates the Ascension. The gospel tells us that Jesus took the disciples from Jerusalem toward Bethany. The Acts of the Apostles locates the event on the Mount of Olives. There’s no discrepancy here. Bethany was built on the slope of the Mount of Olives, only about seven miles from the city. Why does Luke place the Ascension on the Mount of Olives?  That was the location for the coming of the Lord God on the Day of the Lord according to the Prophet Zechariah [14:4-5]. The Day of the Lord refers to that time when Yahweh God would come in glory to restore Israel and defeat his enemies. It’s the consummation of the world. It elicits the image of God’s ultimate triumph at the end of time. We call it an eschatological event. In the New Testament, everything from Christ’s Resurrection until the Day of the Lord at the end of time is one, unfolding eschatological event.

Furthermore, in the Acts of the Apostles, Luke gives us still more descriptive detail. He says, “as they were looking on, he was lifted up, and a cloud took him from their sight,” and “This Jesus who has been taken up from you into heaven will return in the same way as you have seen him going into heaven.” These images are a direct reference to a passage from the Book of the Prophet Daniel [7:13-14].

As the visions during the night continued, I saw coming with the clouds of heaven

One like a son of man.
When he reached the Ancient of Days
and was presented before him,
He received dominion, splendor, and kingship;
all nations, peoples and tongues will serve him.
His dominion is an everlasting dominion
that shall not pass away,
his kingship, one that shall not be destroyed.

What Luke is saying in our passage from Acts is that Jesus, by his death and Resurrection has taken his place with the Father as the divine judge of the living and the dead. But don’t be misled. We mustn’t think of that judgment in terms of God’s condemnation of sinners. Remember that it’s our union with the love that God has revealed to us through the life, death, and resurrection of Jesus that brings salvation, where salvation means a sharing in the eternal life of the Trinity, Father, Son, and Spirit. The judgment of condemnation arises from one’s deliberate refusal to love. The effect is to cut oneself off from the source of life itself. Jesus is judge only insofar as his love is the model against which all other loves must be measured.

One further point before we conclude. The word that Luke uses to for “taken up” to heaven is ἀνεφερετο (anephereto) which is used throughout the Scriptures to translate the Hebrew word קָטַר (qaṭar). That word is used to describe how the smoke from a sacrifice or burning incense is taken up to God. It calls us back to Christ’s offering of himself on the cross, and how, in the Resurrection, his offering is received by the Father.

The first disciples saw no difference between Jesus’s Resurrection, his being assumed into the Glory of the Father, and the transformation of Jesus’s followers by the gift of the Holy Spirit. In Luke’s gospel, Jesus does not go to people outside of his own Jewish faith. It’s only by the gift of the Spirit that the disciples become empowered to spread the gospel to the nations. That’s why, before his departure, Jesus says to his disciples, “repentance, for the forgiveness of sins, would be preached in his name to all the nations, beginning from Jerusalem.” The ultimate conclusion to the Resurrection is therefore the Church’s mission to the world.

Did the Resurrection appearances continue for forty days, as Luke suggests, or did it all happen in just one Resurrection Day as we read in John? It doesn’t matter. Clearly, we are in sacred time and sacred space, as I explained to you in my Lenten talks. So, when we speak of the Ascension, what we’re really saying is that we, by our baptismal commitment to faith, are the heirs and recipients of God’s promise to take us to himself, and to share with us his divine life. That sharing happens in sacred time and sacred space. It’s eschatological. We don’t have to wait for it. The glory that Jesus had in the beginning with the Father is ours in the Spirit, here and now today. It may not look like it, it may not feel like it, but we can experience its presence within us whenever we step away from our daily distractions and allow ourselves to become consciously aware of the Presence of God around us and within us.

Like all our Scriptures, they seem to be telling us the story of Jesus but, in reality, they’re telling us our own story. We celebrate today our Ascension into the glory of the Father, for, where Christ has gone, we, his faithful disciples, will surely follow.