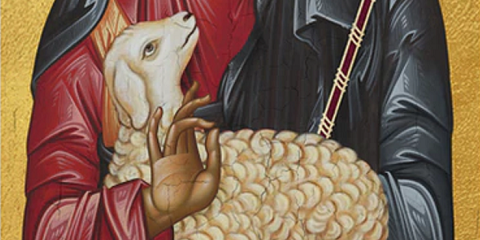 Sometimes taking a gospel passage such as this out of its context limits the listener’s ability to grasp its full meaning. Jesus was walking in the temple precincts on the Feast of the Dedication of the Temple—we know it as Hanukkah. The Jews—presumably the Jewish religious authorities—confronted him. They wanted everything to be plain and simple, just the way some people today want their Bible to be. But the spiritual life is neither simple nor easy. “If you really are the Messiah,” they challenged him, “tell us so in plain words.” Their difficulty wasn’t in the clarity of Jesus’s message, it was in their erroneous suppositions about what it meant to be the Messiah. Although Jesus’s answer didn’t satisfy them, he did answer them, and truthfully.

First, he tells them that he did tell them what they wanted to know already, and that his powerful works testified to the truth of what he was saying. He told them many times, but they did not listen. They ignored both his message and his works. Jesus then explains to them why they didn’t hear or see. “You refuse to believe,” he says to them, “because you are not my sheep.” That’s the background to today’s gospel passage. He then turns to answer the next implied question, “If we, the Jewish authorities, aren’t your sheep, who are they?”

“My sheep hear my voice;” Jesus said to them, “I know them and they follow me.” In other words, those who pay attention to Jesus’s words and works are the ones who come to recognize who he is. He goes on to say that nothing from the outside can separate the sheep from him, the shepherd. As Saint Paul wrote in his letter to the Romans [8:35], “Who shall separate us from the love of Christ? Shall trouble or hardship or persecution or famine or nakedness or danger or sword?” Jesus completes his explanation by telling the authorities, “My Father, who has given them to me, is greater than all, and no one can take them out of the Father’s hand.” Then, he throws in the clincher. “The Father and I are one.” As if to prove Jesus’s point, they picked up rocks to throw at him. Yet, he spoke plainly. They understood his meaning well enough to accuse him of blasphemy. Their minds were closed. Jesus didn’t fit their preconceived notions of what the Messiah would be like. They couldn’t hear his voice. They weren’t his sheep.

“Here comes with power Yahweh God,
who rules by his strong arm;
Here is his reward with him,
his recompense before him.
Like a shepherd he feeds his flock;
in his arms he gathers the lambs,
Carrying them in his bosom,
and leading the ewes with care.”

By claiming ownership of the sheep, Jesus let the Jewish authorities know that he was claiming for himself the role of Shepherd of Israel, and, indeed, stating quite clearly that the Father and he were one. Even more than that, he was telling the Jewish authorities that they had forfeited their right to be numbered among God’s flock. “You are not my sheep.” They looked on Jesus as an outcast when, in point of fact, it was they who found themselves cast out.

Before we finish with the image of Jesus as the Shepherd of Israel, I’d like to point out a couple of nuances regarding this concept that may not be immediately obvious. It should come as no surprise to learn that, for many people, God is either someone who got the universe started—like a clockmaker—and then let the universe go without further intervention, or some sort of impersonal mechanism like the singularity before the Big Bang. To me, such an impersonal deity makes no sense since that would make humans as conscious beings more highly developed than an impersonal God. Obviously, these concepts of an uncaring god are entirely contrary to literally thousands of years of spiritual experience as represented to us in the Scriptures.

So, from our perspective, what can we say about God, as Shepherd of his people? What do we mean when we say the Lord is my shepherd? We can look at the shepherd from two perspectives. The first is what I would call the macro shepherd. This is the one who pastures the flock, providing it with nourishment and preserving it from harm. This is the God who loves his creation, especially humankind, and would do anything for it except to change people’s minds. The most powerful force in the universe is the human will, because God created it as inviolable and God will not interfere with it even, as we’ve seen with regard to the Jewish authorities in today’s gospel, when they reject God’s love and refuse to number themselves among God’s flock. This is the Good Shepherd God who lays down his life for his sheep.

That’s only half the story. There’s also what I would call the micro shepherd. As you know, shepherds not only find lush pastures for their sheep and keep watch over them to preserve them from harm, they also herd their sheep into pens, send them one at a time through a narrow gate where they inspect each one carefully as it enters. When necessary, the shepherd lowers his crook and stops the line to care for any sick or wounded sheep individually. It’s also the micro shepherd who leaves the ninety-nine to search for the one that’s lost. God’s care doesn’t just extend to the universe or humankind or even the Church in general. God cares for each one of us individually. If we’re capable of loving one person as if she or he were the only person in the world, how much more so does our God love and care for each one of us.

That’s the mystery and the miracle of the Good Shepherd, the Shepherd of Israel. We have a God—Father, Son, and Spirit—who is at the same time the macro shepherd, caring for the entire universe and all it contains, and the micro shepherd who loves and cares for each one of us as though we were the only ones who mattered in the universe. Jesus laid down his life for the world, it’s true. But he also gave his life so that you and I might live.

So, any time you may be tempted to imagine that God has no time for you or that God has “more important” things to concern himself with than caring for you, banish those thoughts. “I know them”—each of them—“and they follow me,” says the Lord, “I give them eternal life, and they shall never perish.” We have the Good Shepherd’s word on it.