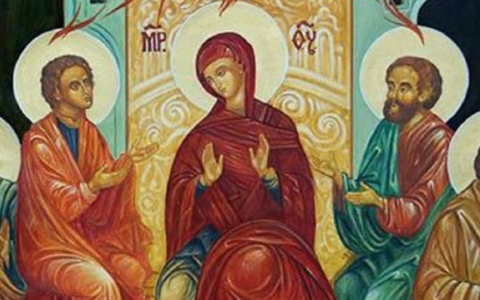 How should we understand the Pentecost event? What are its historical underpinnings, and how should we interpret it, both in its meaning and in its effect on us?

We’ve already heard and talked about today’s gospel reading from Saint John. It was read on the Sunday after Easter. Back then, I mentioned that, in John’s Gospel, the Resurrection, Ascension, and the coming the Spirit all happened on the same day, and they were all part of the glorification of Jesus as the Christ and the revelation of his union with the Father. We’ll return to this point in a moment.

Much of what we think of as the Pentecost event comes from the Acts of the Apostles—the second book of Luke’s teachings and our first reading. For Luke, the Ascension of Christ into glory is the watershed point—it concludes his Gospel and begins the Acts of the Apostles. Like for Saint John, the Ascension links the Resurrection with the coming of the Holy Spirit. Even though Luke spread the three events out over fifty days, he still understands them as one reality.

Luke locates the disciples’ experience of the coming of the Spirit in Jerusalem on the Jewish celebration of Pentecost—Shavuot—fifty days after the Passover. Shavuot was originally a thanksgiving celebration for the spring harvest. Over time, especially after the destruction of the temple in Jerusalem in 70 AD, it also celebrated the giving and renewal of the Covenant and Moses’s receiving the Law on Mount Sinai. That was the context in which Luke wrote. It’s not unreasonable to parallel Moses’s ascent of Mount Sinai and his encounter with God and his descent from the mountain with the tablets of the Law with Jesus’s ascent to the Father and the descent of the Holy Spirit upon his followers.

Luke’s description of the Pentecost event can be related to two important passages from the Hebrew Scriptures. The first passage can be found in the First Book of Kings [19:11-13], where Elijah the Prophet goes up the mountain to encounter the Lord. Here is the passage:

When he heard this, Elijah hid his face in his cloak and went out and stood at the entrance of the cave. A voice said to him, “Why are you here, Elijah?”

In this passage, there are four signs of God’s presence: a powerful wind, an earthquake, a fire, and a still, small voice. We see two of these manifestations—the wind and the fire—in Luke’s description of the Pentecost event. The earthquake appears several chapters later when the apostles are at prayer. “As they prayed, the place where they were gathered shook, and they were all filled with the holy Spirit and continued to speak the word of God with boldness.” [Acts 4:31]. Evidently, according to Luke, when we encounter these signs, we’re experiencing the Presence of God in the Holy Spirit.

The second allusion to the Hebrew Scriptures is the description of the apostles speaking a variety of languages and being understood by all sorts of people from across the known world. It’s a reversal of the fragmentation of humanity we encountered in the story of the Tower of Babel from the book of Genesis [11:1-9].

The inner restoration of unity brought about by the Spirit overcomes fear. From being locked away and cowering indoors out of fear of those outside, the apostles were able to break out into the open and express their faith and love boldly. They broke through the barriers that held them captive—the barriers of misunderstanding, the barriers of dogmatism, the barriers of language and ethnicity. Every barrier is artificial. Every barrier is constructed out of fear. Therefore, for the apostles and for all those reborn and renewed in the Spirit, barriers no longer exist. They have no more power over us because, in truth, they never did.

If our inner and outer divisions are healed by the power of the Spirit and the barriers of fear are broken down, we can begin to experience the unity to which God has called us. Last week, I introduced the term “eschatological,” referring to the consummation of all creation. God’s creative word introduced diversity and division. The universe continues to expand into ever-increasing entropy. In contrast, the power of God’s Spirit—the eschatological power—draws humanity back into unity with one another and with the Father. The counterpoint to the dissolution of the physical universe in the act of creation is the reunification of the spiritual universe through the power of God’s Spirit.

The physical universe has no choice. It is what it is, and it does what it does as it becomes what it will be. The spiritual universe is entirely opposite. It’s all about choice—whether we are going to open ourselves to the transforming power of the Spirit or not. God does not demand our choice. God does not force us to choose. God, through the Spirit, empowers our choice. We’ve been given the gift of the Spirit to overcome the schizophrenia of our sin, to vanquish our fears, to break through our boundaries, to heal our separations, and to achieve that ultimate eschatological unity that Jesus himself prayed that we might find when he said,