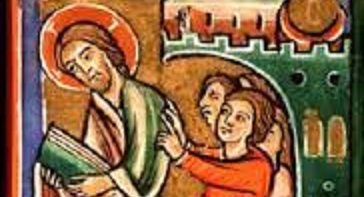 How quickly public opinion pivots! One minute, they’re singing your praises, the next, they’re throwing you to the wolves. Public opinion is still opinion—shallow, unsubstantiated, rootless. The men of the synagogue in Nazareth were impressed by Jesus’s teaching more because they didn’t expect it of him—he was too familiar—than because they were touched by the meaning of what he said. They enjoyed being surprised by an unexpected celebrity in their midst, and they wanted more. “Do here…the things we heard were done in Capernaum.” “Entertain us.” Once again, familiarity breeds contempt.

Jesus would have none of it. Prophetic signs, powerful deeds or miracles, were never performed to entertain. They were signs of faith and compassion—both of which were lacking among the crowd at Nazareth. Jesus shows them Elijah who saved the life of a widow from the gentile city of Sidon and Elisha who cured a pagan Syrian general from his leprosy. They both were needy—the kind of poor in spirit, the anawim, we spoke about last time. The crowd well understood that Jesus was showing them in no uncertain terms that there were no anawim present there. The criticism stung, and as so often happens, rather than consider the message, they attacked the messenger.

That’s what happens when superficial opinions are challenged. Rather than dig deeper and question, rather than examine false presuppositions and prejudices, people find it much easier to silence opposing ideas. “There are none so blind as those who will not see.”

This morning, I’d like to take a deeper look into this very human behavior. In every case, whether in the synagogue at Nazareth or in our own experience, it begins with ignorance. Is this surprising? It shouldn’t be. We are all ignorant. That’s where we started out. Isn’t life one big learning experience? There’s always more to learn because, as finite human beings, we’re never entirely free from ignorance. It doesn’t matter whether we know what we don’t know, or if we don’t know what we don’t know. The result is the same, and we should be used to it by now. Unfortunately, very often, we’re not.

What happens to us when we’re confronted by our own ignorance? How do you feel when someone says to you, “I can’t believe you don’t know that”? Do you feel that tightening in your stomach? That’s fear. It’s the fear that you don’t measure up, that, somehow, you’re inadequate, and that you’ve been found out. Haven’t you ever had the feeling that you were just pretending—that you were actually a fraud—and somebody might find out? That’s the fear I’m talking about.

What happens when that fear threatens to overwhelm you? What’s your reaction? There are only three options available to you: fight, flight, or freeze. In this case, flight and freeze are the same reaction. That’s taking a defensive posture. You pull inward like a turtle or roll up in a ball like a hedgehog. Interestingly enough, for humans, the preferred reaction is to fight. That implies that you’ve taken your fear and turned it inside-out, transforming it into anger. That anger energizes you into taking aggressive, offensive action.

Consider today’s gospel. The crowd’s opinion of Jesus is challenged, and their ignorance is exposed. They’re afraid of being made to look like fools in front of one another by this upstart Galilean. Because they’re afraid of being shown up as wrong and having to change their opinions, they refuse to look inward. Instead, they turn their fear into anger and drag Jesus to the edge of the cliff to get rid of him. That explains a lot. Take that dynamic and spread it to the chief priests and elders of the temple and the crowds that followed them, and you’ll better appreciate the forces that led to the crucifixion.

At its core, the motivation for all injustice and all refusals to love is fear. In fact, fear is the motivator behind all sin—sins of omission as well as commission. If you want to get a handle onto what original sin looks like in you, just examine your fears. If you take any fear back to its roots, you’ll find it’s saying to you that you’re going to be deprived of what you need to live…and you’ll die.

There are two lessons we can take away from our reflections on today’s gospel reading. The first is this: the way that Jesus overcame original sin—humanity’s tragic flaw—was to banish fear and replace it with absolute trust in God. He banished injustice by willingly accepting to become an innocent victim despite his fears. He banished refusal to love by giving his all, even to those who were most undeserving of it. He emptied fear of its power by accepting death and revealing the resurrection. Death has no more power over him [Romans 6:9]—or over us.

The second lesson is a lesson in faith. If faith conquers original sin by emptying fear of its power, then fear can never be used to inspire faith. Threats of God’s wrath and the fires of Hell may force conformity of behavior, but they can never stimulate faith. In fact, threats do precisely the opposite: they provide original sin with its power to weaken and destroy us. Oh, what damage we Christians do when we use fear—the power of sin—to combat sin. Christ has already shown us by his example and his grace that sin and death are defeated only by the power of the Holy Spirit through faith in a loving God. Remember, it is that God who loved us into being, who loves us through all life’s difficulties, and who will love us into life eternal. What, then, have we to fear?

2 Replies to “Fear: The Original Sin”